Reflections – Helen Myers – Political Years 1948-1962. Remarks made by Paul A. Myers upon the initial annual presentation of the Helen Myers Leadership Award by the Claremont Democratic Club at its holiday celebration meeting December 2, 2018. 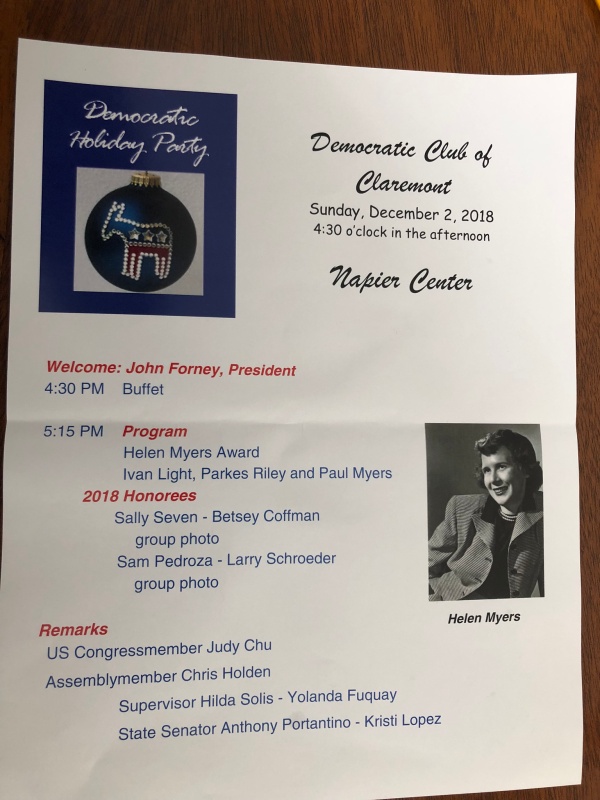 Thank you very much for naming your leadership award after Helen Myers, my mother.

It has a special meaning coming from this storied club, in this city that she loved, and in this year where Democratic women have played such a central role.

My remarks highlight the two dimensions of Helen’s political career. The first is the Rule of 51 Percent–what it takes to win elections. The other is that the Democratic party is when successful always a coalition of people. The Democrats are always more than just about mobilizing a base.

Helen managed two partisan election campaigns that bookended her activist years. In 1950, she managed Evelyn Johnson’s assembly campaign in a district centered on Walnut and El Monte. The ladies ambushed the Republican chairman of the Assembly Ways and Means committee and won the Democratic primary in those days of cross filing. Then the Korean War crushed the Democrats in the fall. But the primary victory put Helen into the Organizational Chair of the Los Angeles Democratic Central Committee.

In 1958, Helen managed the congressional campaign of Rudd Brown in a La Canada-Flintridge district and they lost in the general on a recount against Edgar Heistand, the first announced member of Congress in the John Birch Society. Rudd was the granddaughter of William Jennings Bryan and the daughter of Ruth Bryan Owen, the nation’s first woman ambassador when named minister to Denmark in 1933 by Franklin D. Roosevelt. Rudd was married to Dr. Harrison Brown, a Cal Tech professor and Foreign Secretary of the National Academy of Sciences. Brown had been Adlai Stevenson’s nuclear adviser in the 1956 presidential campaign. This was a sophisticated, well-intentioned crowd of martini-loving intellectuals. Growing up in this milieu was like growing up in a cocktail party in a New Yorker magazine cartoon.

In between these two campaigns were the party building years involved in establishing the California Democratic Council IN 1954 and revitalizing other state-wide Democratic organizations. This was all basic groundwork that set-up the magnificent victory of 1958 that brought Pat Brown to the governorship and other Democrats to state-wide office and local district victories. The Democratic program was broad-based economic development centered on education, water, and freeways. Those victories changed California in the most fundamental manner. Southern California benefited hugely.

The Southern California Democratic party, then and now, is a sprawling and often fractious coalition movement—its strength and weakness. The club network added a grass-roots element to the power mix that northern California has never really had. Southern California could deliver a lot of votes in state-wide races, often from suburban voters in otherwise Republican legislative districts.

Donald Trump illustrates many stark contrasts, but the most important takeaway is that in America only one political party represents the overall interests of the people. Mobilizing the people behind programs leading to broad-based social improvement is the enduring task of the Democratic party.

Note: After the awards were made, Congresswoman Judy Chu addressed remarks to the Club upon the significance of the recent Congressional victories stressing the grass roots role played in winning new seats across California. A nice holiday dinner and plenty of good wine made for a festive evening.